More Than Good Advice…be nice. Is an Action Plan 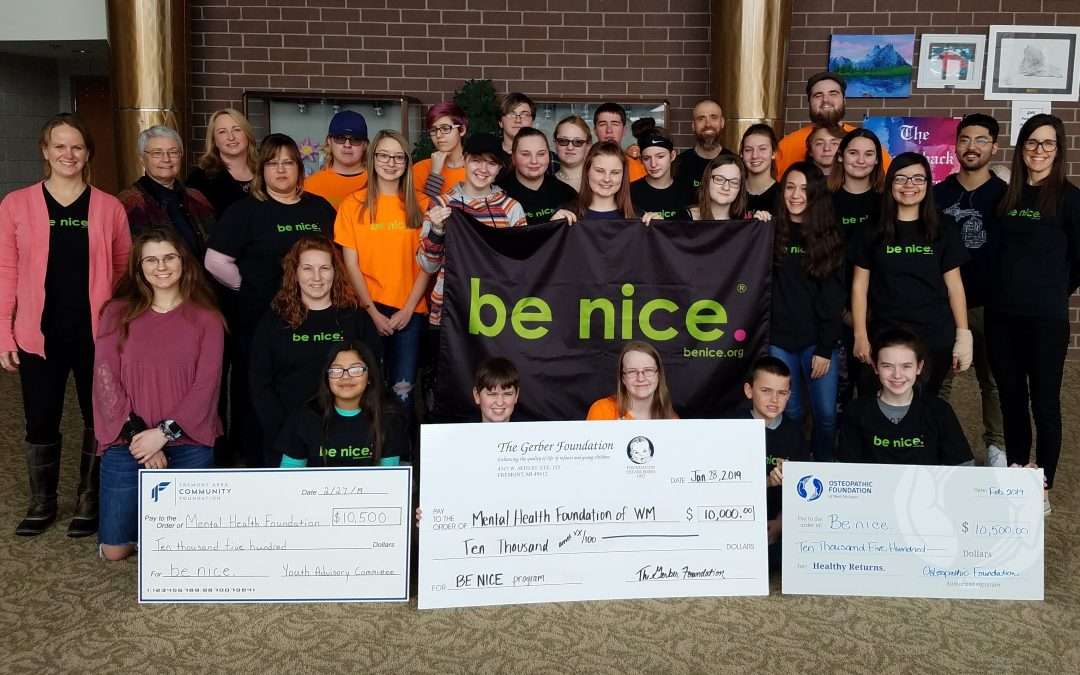 How many times did your parents admonish you to “be nice” when you were growing up? Now the Mental Health Foundation of West Michigan is using that phrase to build awareness of mental health in schools.  The be nice. Action Plan helps normalize conversation around emotional and mental health at a young age.
This program equips students, teachers and parents to approach people they perceive might have a need, hopefully before it becomes a crisis. That’s important, because suicide is the second leading cause of death for Michigan youth ages 10-24.  “The Osteopathic Foundation granted $10,500 to support a comprehensive be nice. implementation in Newaygo County starting in September of 2018,” says Andrea Masvero, Executive Director. “The osteopathic community recognizes that mental health is important to wellbeing. When we learned that Newaygo schools, like many rural communities, had a 30 percent higher rate of suicide than the state average, we partnered with the Gerber Foundation and the Freemont Area Community Foundation to fund this intervention.”
“This is more than a program,” says Kate Meengs, Development Coordinator for the Mental Health Foundation. “We’re actually changing the school culture.” That’s because students own it. The entire staff receives training in the beginning. Then each school picks a staff liaison, who in turn identifies students to help lead implementation. The students find ways to notice, invite, challenge and empower as part of their culture. They take tremendous pride in being involved. As for the cost? Stop by your favorite coffee shop for a grande coffee and you’ll spend more than be nice. Implementation costs per student! “Our combined grant is reaching every school in Newaygo County. That’s impacting more than 7,500 students at a cost of less than $5 per student,” continues Andrea. “That’s incredibly cost-effective suicide prevention. We’re also equipping students with higher-level skills such as leadership, communication and creativity.”
The program encourages conversation so that students who have mental health needs get help sooner. But research is showing some fascinating side benefits as well. “Grand Valley is researching the impact of be nice.,” continues Kate. “The full results won’t be available until the end of this school year. However, we’ve already found a decrease in negative behaviors, such as inappropriate use of cell phones, classroom disruption and mean behavior.”
“be nice. ties into our character education program,”says one elementary principal. “It allows the kids that make poor choices to be recognized ­or the opportunity to do something good.